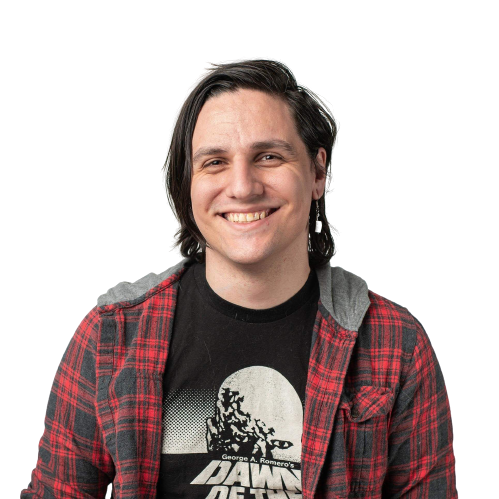 Currently messing around with using RedwoodJS, Apollo, GraphQL&Prisma, Serverless Functions, and JAMStack APIs & services more on my free time. I'm procrastinating getting the CSS Grid updates and Chakra-UI down efficiently.

As a side project I'm maintaining my social network built with Node.js, Express, Apollo Server, Mongoose/MongoDB, GraphQL for the Backend/API, hosted on Heroku. React (including Hooks, Context, and Suspense), Apollo Client, GraphQL, and a handful of node packages for the Frontend, hosted on Netlify. Currently working on migrating it over to RedwoodJS.

I started off in the world of HTML around 2007 out of pure curiosity of the internet and decided to branch out into the exciting world of code and MAKE MY OWN WEBSITE gasp. I actually started out as Graphic Designer, and my first job I had to maintain their sites as well. I realized there pretty fast that I had a natural knack for coding. So from then I focused on HTML, which when I started was in and thankfully soon into my time became the norm, and this fancy new thing being used in browsers called CSS2. Eventually I kept growing my languages/frameworks/tools. Some skills I've built over the years are in: JavaScript, HTML, CSS, PHP, SASS/SCSS, Ruby on Rails, React, Prisma, GraphQL, Apollo, Redux, and Next. I have experience in relational PostgreSQL/MySQL/MariaDB and noSQL database MongoDB (along with Mongoose ORM). Also dabbling with others that I dont call myself proficient in yet, like: Elixir, Rust, Angular, Vue, React Native, Python, Java, FaunaDB, Firebase, Gatsby, Redwood, and others, just ask!

I prefer not to work in ASP.NET, Visual Basic, and C# as much as possible and will likely pass if a major part of the role is coding in it, as full disclosure.

I am experienced in Windows(95-current), Mac(10.4-current), and Linux (Ubuntu is my specialty but I also have experience in CentOS, Arch, Kali, and Mint distros) environments. I use my Macbook Pro to program/design/everything else besides gaming. My favourite tools of the trade currently are VS Code (GitLens and TabNine are killer plugins), Firefox Developer Edition, and iTerm w/ oh my zsh & other addons.

On a not so techie note, I'm a music fanatic and constantly listen to music. My favourite genres are Darkwave and Dark/Horror Synth. I am a Drummer & Percussionist and currently procrastinating learning piano again (played when I was 10-12).